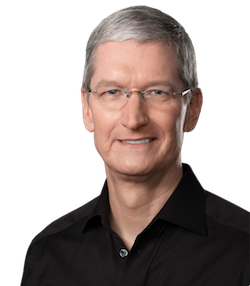 Today marks the fifth anniversary since Tim Cook was named Apple CEO on August 24, 2011, the same day that late co-founder Steve Jobs stepped down as chief executive for the final time and recommended the board of directors appoint Cook as his permanent successor.

Upon reaching the five-year mark, Cook has today unlocked previously awarded stock bonuses currently worth over $100 million. The bonuses are tied to both his tenure and Apple’s performance under his leadership, including its total shareholder return relative to the S&P 500 index.

Cook’s bonus could be even higher if Apple’s total shareholder return is in the middle third or top third relative to other companies in the S&P 500 from August 25, 2013 through August 24, 2016. He will receive another 140,000 RSUs for middle third performance, or 280,000 RSUs for top third performance. AAPL has risen around 52% since August 25, 2013, while the S&P 500 has risen around 32% in the same time period, making at least a middle third finish a strong possibility.

A restricted stock unit, or RSU, is a form of compensation valued in terms of company stock, but the stock is not issued at the time of the grant. Instead, the recipient gets shares of stock at a later date, generally only if they are still employed by the company. Cook personally requested that his award be modified to adhere to a more performance-based compensation system in 2013. Another 700,000 of his RSUs are scheduled to vest on August 24, 2021, plus 280,000 RSUs each August 24 through 2021.

Cook’s net worth, assuming he remains with the company through August 24, 2021 and meets performance targets, is estimated to be over $500 million based on his current stock options and RSUs awarded. He has previously pledged to donate the vast majority of his wealth, including these stock bonuses, to charities in his lifetime. In May 2015, for example, Cook donated approximately 50,000 shares of Apple stock, then worth approximately $6.5 million, to undisclosed charities.

Cook has overseen the launch of the Apple Watch, MacBook Pro with Retina display, ultra-thin 12-inch MacBook, iPad Pro, several iPhone and iPad models, Apple Maps, Apple Music, Apple Pay, Siri, and many other products and services since taking over the reigns in 2011. Apple became the world’s most valuable company in 2012 under his leadership, and it continues to hold that title today. Apple stock has risen over 132% since Cook was appointed as CEO five years ago.

Previous Here’s How the New Teslas Stack Up Against Bugatti, Lamborghini, and Ferrari – Bloomberg
Next What should Tesla’s next vehicle be after the Model 3 and Model Y? Our poll results – Green Car Reports